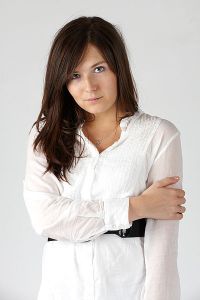 Abby Slenson, an online marketing consultant, announced to her friends over Sunday drinks that she’s “completely done” getting romantically involved with what she described as “any and all Steves. Never again.”

Slenson’s decision to eschew any past, present, and future guys in her life named Steve was reached after what she calls “[her] consistent rotten luck with guys named Steve. They’re just the worst!” According to an utterly fed-up Slenson, “the most recent Steve was just so… ugh. And don’t get me started on OTHER Steve. And the Steve before that!”

As the afternoon went on, Slenson cited other unsavory attributes of the Steves she has encountered. “Steve B. came on strong but disappeared for no apparent reason, Steve Y. was alright but didn’t understand sarcasm, while Steve M. didn’t like dogs, cuddling, or the idea of children existing. Steves, man!”

Perhaps even more damning for Steves everywhere was the revelation that several of Slenson’s girl friends had similar negative experiences with a number of their own Steves.

“Steve-With-the-Hair — you remember Steve-With-the-Hair… he would cry kind of all the time,” recalled Chloe, Slenson’s roommate from college and current closest gal pal. “A guy crying when something emotional is happening is perfectly normal, but this was out of control for any person, guy or girl. He cried all through the entire The Hobbit: An Unexpected Journey. And in case you haven’t seen it, that is not a short film.”

Sarah, another friend of Slenson’s, pointed out that she had dated a lame guy whose name was not Steve, but in fact Carl, before quickly remembering “his middle name was totally Steve, though!” Sources confirmed that Slenson’s gay best friend, David, had also been much happier ever since he quit Steves just over a year ago and never looked back, saying “I don’t even miss them.”

Based on the combined anecdotal evidence from herself, her friends, and their friendly waitress that “deals with a lot of Steves on a day-to-day basis,” Slenson concluded once and for all that all Steves are “nothing but bad news waiting to happen.”

According to Slenson, not even a famous Steve could entice her. “I don’t care if Steve Spielberg himself tries to catch my attention one day on the street—if he’s named Steve, he’s gotta leave! I just thought of that, too.” Slenson took a deep swig of her appletini before adding, “besides, I’m still not over Indiana Jones and The Kingdom of the Crystal Skull. Unbelievable.”

At press time Slenson has admitted she might still consider “a nice Stephen.”