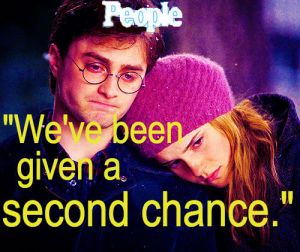 On Sunday J.K. Rowling, world famous author of the Harry Potter book series, dropped her latest bombshell on the wizarding world when she admitted that Hermione Granger should have ended up with Harry Potter instead of their mutual best friend Ron Weasley. In the wake of Rowling’s stunning revelation, Harry and Hermione announced their plans in Tuesday’s issue of The Daily Prophet to leave their respective spouses and children to “begin the second chance we never thought we’d have.”

“This decision has not been an easy one for us to make,” said an exhausted but relieved Hermione as she assured fans that her choice to leave Ron for Harry was not made lightly and was only reached after much soul searching. The star-crossed witch and wizard pointed to Rowling’s assertion it was they who should have been living in marital bliss all along as the tipping point for their decision to throw caution to the wind in true Gryffindor fashion and start anew. “For years we privately tossed around possibilities but never dared take them seriously. I can’t tell you how many times I thought about the invisibility cloak or the time turner and thought maybe we could– but it always came back to the belief we were already leading the lives we were supposed to live… or so we thought.”

The pair acknowledged that their families and friends, “especially the Weasleys,” were right to be disappointed, but that this arrangement was best for everyone. Sources say that throughout 20 years’ worth of Weasley-Potter family gatherings, there were many stolen glances, lingering hugs, and hours of late-night conversing between the two about “what might have been” after everyone else had long gone to bed. According to friends close to the two affected couples, J.K. Rowling’s admission about their lives “pulled all of that stuff out into the open like a screaming mandrake.”

Harry offered his own theories as to how this whole mess occurred in the first place. “Our last few years at Hogwarts were emotionally tumultuous to say the least, and it’s easy to see how romantic mistakes were bound to be made,” explained Harry in an interview. “For god’s sake, Luna was having it off with Fred and George all the time, sometimes at the same time. Or has Jo Rowling not shared that one yet?” Neither Harry nor Hermione could have predicted just how long it would be before they were made aware of their tragic mistake. “Like I said, we were all kids, Voldemort was killing everyone… it was a wild, confusing time.”

Ron and Ginny Weasley, Hermione and Harry’s husband and wife, respectively, have issued their own responses to the shocking announcement. “I’ve known for a long time, I think we’ve always known,” said a shell shocked Ron. “At our wedding somebody slipped veritaserum into my butterbeer… and I might’ve said something to Harry that it should have been him that would get to explore Hermione’s chamber of secrets instead of me.” Ron steadied himself, quietly whispering an audible “bloody hell!” before continuing, “Harry, bless him, told me that was nonsense. He said that if he and Hermione were meant to be together, J.K. Rowling wouldn’t have stuck him with Ginny, and that this was the way things needed to be. Then he made me swear not to tell Ginny about any of that business.”

Ginny expressed a similar mixture of sadness and relief. “Harry really tried in our marriage – for me, for our kids- he really did, but I could tell his heart was somewhere else by the way he always told the story of the night he and Hermione teamed up to save Sirius and Buckbeak’s lives in their third year. Even worse, it became harder and harder to ignore the way he would accidentally call out Hermione’s name instead of mine whenever we’d play Exploding Snap,” said Ginny. “I don’t care how you pronounce them, Hermione and Ginny are not similar names!” Ron nodded knowingly before adding, “I tried to tell myself ‘Harry’ was just a nickname Hermione had given me to spice things up.” All parties involved agreed they were going to need more than chocolate and a flashy patronus to deal with this joyless situation.

While everyone involved seems to be on the same page, fan reactions to the news have been mixed. Many are pleased for the couple to “finally put themselves and their happiness first for once,” but others are especially devastated by the Hermione-Ron split, arguing that such drastic changes “just because of something J.K. Rowling said” are outrageous and unnecessary. Harry responded to criticism on Twitter, citing precedent first set in place by Dumbledore. “For years Dumbledore – you remember, the one I named my son after!- was just a wonderful wizard and mentor who happened to like knitting, and had no apparent sexual preference right up until the moment he left us. When Jo Rowling said Dumbledore was gay, he was 100% just as wonderful and also 100% gayer in our memories after that. That’s how this works. It’s just too bad she couldn’t have out-ed him before he died when he had a chance to live his life differently. Hermione and I on the other hand… we’ve been given that gift.”

J.K. Rowling has also revealed that she plans on righting other wrongs before it’s too late, saying “were I to do it over, I’d add a math or English class to the Hogwarts curriculum so that people in the wizarding world can add and spell past a 5th grade level. Maybe some wizard college courses, too.” Rowling reported she is not proud of what she’s done, but feels “at least now Harry and Hermione can have the real shot at happiness I’ve denied them for so long. “

Hermione and Harry candidly shared some of their hopes for the future with reporters. “We will always love Ron, Ginny, and our kids James Sirius, Albus Severus, Lily Luna, Rose and Hugo, but we’re very open to the idea of having more children,” the optimistic couple said. “As for names, we are definitely favoring Lily-James Hagrid Potter or Buckbeak GinnyRon Potter for a girl and Cedric Dobbydore Potter for a boy,” said Hermione.  “We also really like the sound of ‘Dentist McMuggle’, after Hermione’s mum and dad,” chimed in Harry before Hermione added, “Of course, we’ll have to see what J.K. Rowling comes up with in a few years. She could always come out and say Harry should have been sterile, so we’re taking it one day at a time.”

Other prominent figures in the wizarding community have grown curious about what J.K. Rowling might have in store for them. “Why yes, I do sometimes wonder if Rolf was the right way to go,” said Luna Scamander (formerly Lovegood) in reply to a question no one had actually asked her. “If Ms. Rowling were to mention any regrets about me… well I don’t know, one can dream.”

Patrons at The Leaky Cauldron reported Ron had most recently been spotted at the popular wizarding pub and inn. According to onlookers Ron was seen yelling to anyone who would listen that he’s considered “giving online dating a go,”  in between assertions that J.K. Rowling “could have had the decency to suggest what Ginny and [he] are supposed to do now. I imagine she could check in with Dean Thomas? Blimey… where is Cho Chang these days?”

The couples have asked that the privacy of their family and friends be respected during this difficult but long overdue time. “I’m certain that if J.K. Rowling hadn’t said anything, Harry and Hermione would have gone on nobly doing what they thought was the right thing,” Ginny shared with reporters. “But the truth is… it was killing us to keep up the façade when the magic just wasn’t there. Now they’re free. We all are.”

At press time, Hagrid has not commented on any of this.

One thought on “Harry and Hermione Leave Everything Behind To Start New Life Together With J.K. Rowling’s Blessing”