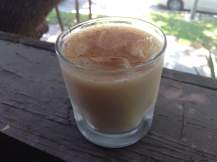 LOS ANGELES, CA – Local white woman Sadie Andreyevsky reported to authorities this morning that she felt “flustered, broken, and confused” – because of her favorite rice, vanilla, and cinnamon drink.

“I know I’m doing it wrong,” she announced to a silent press conference, visibly welling with emotion. “But I can’t stop. I think it’s my mouth? I don’t know.”

Andreyevsky grew up in Southern California, exposed to horchata from a young age. This didn’t protect her from her frustration.

A reporter for the Los Angeles Times says the reason this story grips so many people is because of how desperate, yet close to home, Andreyevsky’s affliction feels. “There’s literally no way to solve this. That scares people,” she shared after the conference. “She studied abroad in Spain.”