Adulthood Struggles / Celebrities / In The News / The Man

“You just have to see it! It’s funny in my head,” said an actress named Jan* to her friends and family today, after they suggested she reconsider.

One of the recent astounding gifts of the internet is a window to the masses of people unaware that painting on a darker skin color for a costume is generally considered offensive – and it’s a gift that, unfortunately, keeps on giving.

“I think I’m pitching it wrong,” Jan said thoughtfully in an exclusive interview. “I’m going to a costume party where the theme is ‘achievements of women,’ so I’m going as Oprah. Is the wig just too cartoony? Is it the brown grease paint? You have to see it on, then you’ll get it. …It’s Oprah.” 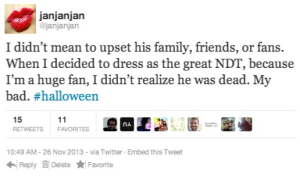 And an “apology” about her apology:

Jan is concerned that the continuing internet outrage will interfere with her possible plan to dress as Black Santa for Christmas. “It’s a family tradition, what does everyone want from me?? This had better all blow over by Martin Luther King day. I’ve got something really awesome planned,” she added, with a giant wink that probably implies something about blackface.